St. Vivian’s is actually in Milan, New Mexico, a bit west of Grant. It is the newest of the four local parishes in Cibola County. The church was built in the 1960s on land donated by the mayor of the town, Mayor Milan. St. Vivian’s has the only late mass between Gallup and Albuquerque.

Grants, New Mexico, started out as a railroad camp settled by three Grants brothers from Canada. It prospered as a railroad town (a bit of a theme for our current road trip, it looks like!) until the Great Depression, when logging and railroad building dwindled and Grants became the Carrot Capital of the United States.

What with tourism and carrots, Grants was doing okay. Then a Navajo shepherd named Paddy Martinex discovered uranium in the area. Milan was one of the towns that grew up during the uranium boom that lasted through much of the 20th century, when Grants went from being the Carrot Capital to being the Uranium Capital. 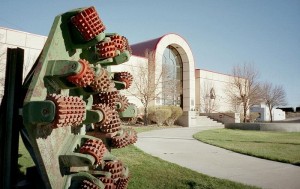 The Mining Museum in Grants, NM

Now, although there is still some mining going on, tourism is the main industry in this beautiful area. Near the Painted Desert and the Grand Canyon, Cibola County is the newest county in New Mexico, having been formed in the 1980s.

It looks a lot different here from in Oklahoma where we build our church pews!

This is one of the parts of the job I really love — delivering and installing beautiful new pews for churches all over the country, getting to meet new people and see new places.