History of the Church Pew 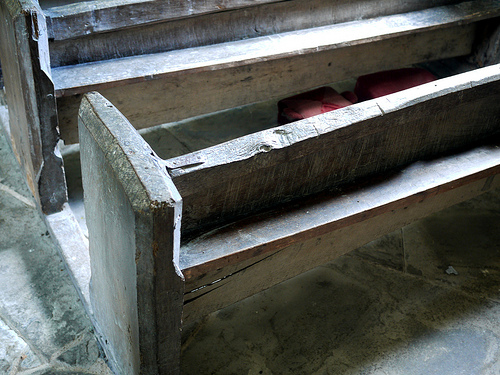 Did you know that in the 1840s, a huge rift in the Church of England was created by church pew rents? In the United States we think of them as a vital piece of church furniture, without which it’s not really a church, many churches in Europe don’t have church pews or didn’t have them at one time.

In the early 13th century, some churches started cutting benches into the stone walls for seating. Called sedilia, they were originally intended for the priest and assistants, like deacons and sub-deacons, who were officiating Mass. Some churches even expanded this idea to backless stone benches around the walls for parishioners.

Over time, these benches moved closer to the middle of the church, and other materials were used. The pews in this photo are 13th century solid oak church pews, made out of the same kind of wood we use in our church pews.

As church services grew longer, people didn’t want to stand and kneel directly on the ground during services. In efforts to raise money for church buildings, churches allowed parishioners to pay to have a church pew placed in the nave for their family’s use. Over time, this practice became the norm across much of England and spread to other countries as a way for churches to raise funds. Church pews were passed on through generations and considered the private property of the owner, not the church, by law.

In the 1830s, 40s, and 50s, people started to write about how this practice was excluding people from the church. The writers felt that keeping people from attending worship because they couldn’t afford a seat was not very Christian. Numerous pamphlets were written on the subject in England and gave rise to “free and open” churches where seating was open for anyone instead of being owned by individuals. The practice stuck in the United States where church pews are considered part of the church, not a legal possession of an individual or family.

While family pews can still make a good fund raiser, welcoming rows of pews are the norm in modern American churches. Call us if you need new pews in your sanctuary!