We recently had the privilege of building Inspiration Ministries of Alamo. TX, some custom pews. They fit perfectly in their beautiful worship space. We are so happy to have been able to work with them and hope that they enjoy their news pews for years to come.

Not to be confused with The Alamo in San Antonio, the town of Alamo is located in the Rio Grande Valley at the southern tip of Texas. Alamo is also known as the “Refuge of the Valley” due to the town’s close proximity to the Santa Ana Wildlife Refuge. 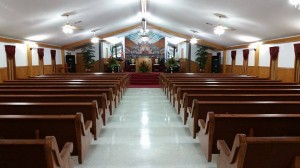 Two men by the names of Peter Ebenezer Blalock and George T. Hawkins put together 32,000 acres of land between the years 1902 and 1909 and started building up a little township complete with a railroad depot they called “Ebenezer”. This area soon became known as Camp Ebenezer.

In 1909 the land that made up Camp Ebenezer was sold to the Alamo Land and Sugar Company. The Alamo company moved the town from it’s lower location to a higher elevation and better drained location.

The town reportedly had a bit of an identity crisis. At first the town was called Forum and then Swallow before finally settling on Alamo.

The town of Alamo TX had their first post office in 1909 and their first official bank in 1920. The town population started to grow steadily after 1924. Today one of the biggest draws to the town is the nearby wildlife refuge.

Santa Ana Wildlife Refuge is over 2,000 acres of protected land that borders the banks of the Rio Grande. The refuge was established back in 1943 as a means to protect the birds that migrate to the area. Over 70 years later, the refuge is still a popular destination for birdwatchers. It’s even been called a “birding delight”.

In addition to the birds, the Santa Ana Wildlife Refuge is home to over 300 species of butterfly and two of most wonderfully named species of feline. The Texas Ocelot and the Gulf Coast Jaguarundi not only have great names but very  cute faces. 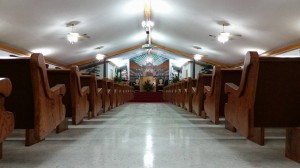 We enjoyed our visit in Alamo and feel blessed to be able to work toward creating an ideal worship experience for the people of Inspiration Ministry. Thanks again to the wonderful folks in Alamo!